view An epic Vegas bachelor party... On a budget. - Just Get Out Of Town

Years ago, my brother-in-law was getting married. (We’ll call him Kenny, and we’ll call his fiancé Kelly.) I was his best man and he wanted to have his bachelor party in Vegas.

When he gave me the list of friends he wanted to invite he said “These guys are all in grad school and most of them are on REALLY tight budgets.”

How are we supposed to have a bachelor party in Vegas on a tight budget? Cover charges for one night of club-hopping alone was going to break the bank for most of these guys.

OK… Challenge accepted. Let’s roll our sleeves up & get this figured out.

Two of us had a ton of points, so a couple free flights and a couple free rooms added money to the dance club-hopping budget.  But still, $20 to $25 cover charges and $10 to $15 drinks can add up fast when you’re on a tight budget.

A few guys were within driving distance so they said they’d bring a couple cases of beer. Pre-drinks for 10 guys will save another few hundred bucks. Not exactly living the dream, but hey – you gotta do what you gotta do when many in the group are on a beer budget but have champagne taste.

Then, during the planning stages, LIGHTNING STRUCK! 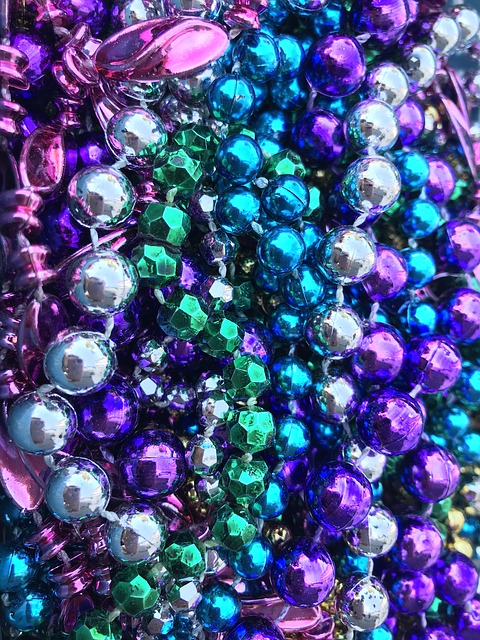 We realized we were going to be there during Mardi Gras. Granted, we weren’t going to New Orleans, but what the hell – we could have a little fun with some mardi gras beads. We hopped on ebay and found about 500 sets of beads from China for under fifty bucks.

Knowing people in Vegas would get arrested for public displays of boobs, we came up with a different plan.  We had Kenny wear a t-shirt that had had a bunch of checklist items custom printed on it with a list of things people could do to “earn” a set of beads.

Things people could do to earn beads included:

About 400 of the beads were regular beads that cost less than a nickel a piece.  100 of them were “special” beads. They were extra large, and were things like beer extra-large hearts, dice, a pair of aces, etc. They cost 5 to 10 times times as much as the normal beads at a whopping $.25 to $.50 each.

Little did we know how much those beads would change the course of our night.

Saturday morning, we realized the beads were so cheap they stained our shirts, but we didn’t care. We wore them out Saturday night too.

THEN there were the “special” beads…

We made sure Kenny was the only one of us who had the special beads. He only had a couple at a time, and people almost always asked “What do I have to do to get a set of THOSE beads?” Kenny named the terms at first and it was initially stuff like dancing with him.

BUT we quickly realized that people REALLY wanted those beads and were offering to do things we wouldn’t have even imagined.  I think our record was someone offering to buy us a round of drinks.  The guy easily dropped $100 buying us all drinks so he could get his girlfriend a set of coveted heart beads…

Fifty-Freakin-Cent-Heart Beads.  (Out of respect for them, we waited until we left that club before pulling another set of heart beads out. 😉

It was better than we ever imagined, and we felt like celebrities all weekend. Not bad for a bunch of grad-school dorks (and an even dorkier over-the-hill brother in law walking around with a backpack full of beads.)

The moral of the story?

Travel memories hold a special place in your heart, and stick with you forever.  That trip was one of the most tight-budgeted trips I’ve ever been on, and it was over a decade ago. But those memories still seem like yesterday, and will forever bring a smile to my face.

Bleary-eyed and hung over Sunday afternoon, we said our goodbyes at the airport before heading to our respective terminals. As Kenny and I got on the tram to head to our terminal two girls came running up beating on the window yelling: